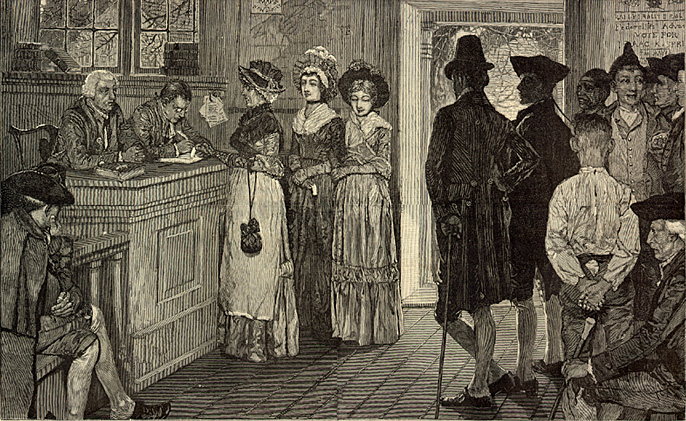 The Mapping Early American Elections team is pleased to launch the project website.

During this three-year project, funded by the Division of Preservation and Access at the National Endowment for the Humanities, we plan to blog about our process and progress. Our project is building on the New Nation Votes (NNV) collection of electoral returns, a project that was also funded by the NEH. Mapping Early American Elections is turning those election returns into a dataset which has a spatial component. Our dataset will offer researchers new opportunities to visualize and map the changing character of early American democracy as revealed through the country’s earliest elections, 1787 to 1825.

By the end of the grant, we anticipate creating 50 maps and visualizations representing Congressional and state legislative elections for 24 states. This website will include a map browser inviting users to explore early American political history in exciting new ways. Issues such as changes in voter participation, turnover in Congress and the state legislatures, the growth of party competition, and regional changes in voting patterns will appear with new clarity.

To make maps, first, we need mappable data. Lincoln Mullen and Jordan Bratt have begun the process of reviewing and preparing the NNV electoral returns that will enable the mapping of election returns by county, congressional districts and (for some states) by city and town. A GitHub repository includes the preliminary data as we are working on it, along with the other code produced by the project. If you are interested in the data, you can follow the data preparation progress through commits and issues in GitHub.

During subsequent phases of the project, the team will write companion essays to describe the historical context in which the maps should be understood. We also want to make the process of making maps with this important data set easier than it is now. To help accomplish that goal, the team will also prepare tutorials to show users how to create their own maps, using QGIS, for example, for their own research. With online documentation, we will encourage others to use this data for their own teaching and research.

Mapping Early American Elections would not be possible without the New Nation Votes collection, which is the only complete and comprehensive set of election returns for all states in the Union at that time. Over the past forty-five years, Philip J. Lampi of the American Antiquarian Society has painstakingly compiled this information, scouring records found in courthouses, state archives, newspapers, private correspondence, and local repositories throughout the country. A succession of NEH grants over the past decade allowed the AAS, in conjunction with Tufts University, to digitize the records and create an online collection of the election returns. This resource contains the results of more than 23,600 elections with over 44,000 candidates for local, state, and federal offices, including county coroners, state legislators, governors, federal Congressmen, presidential electors, and many others.

Follow our blog for periodic updates on our progress and for major releases of data, maps, essays, or tutorials.

Mapping Early American Elections is generously funded by the National Endowment for the Humanities and developed by the Roy Rosenzweig Center for History and New Media at George Mason University.

This site is licensed under a Creative Commons Attribution 4.0 International License.